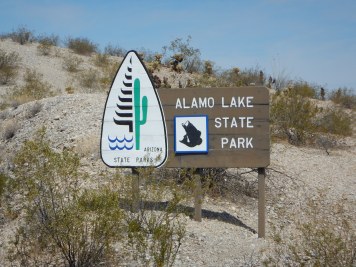 This was our first trip out in the truck camper post Sam’s knee replacements.  We called my sister Kim and Brother-In-Law Guy to see if they wanted to meet us for a night of camping. Because they live in California and we are in Goodyear AZ, we wanted to find  a State Park somewhere in the middle…it turned out to be Alamo Lake State Park.    Kim and Guy had been trying to decide if they want to invest in a trailer to camp and haul their side by side Razor around.  They decided to join us and because they didn’t want to sleep in the Truck Camper with us on our cramped Dinette table/bed conversion or sleep on the ground they chose to dip their toes in the water and purchase a tent and mattress that fits in the back of their Tundra.  I called them on Tuesday and by Thursday, thanks to Amazon, they had all they needed delivered to their home.

Kim and I did not grow up in a family that camped.  Growing up in Tempe, we would drive out to South Mountain Park and have picnics, but nothing over night.  We  were a large family, so I imagine at times it was a crowd control issue. I was told that our dad took us camping once when were were very young, but I don’t have a memory of it like my older sisters do.  I would say that Sam and I still do not camp, we Glamp, with what amounts to a studio apartment on the back of our truck, but my sister was going to sleep in a tent in the back of her truck.  This classifies as camping to me. 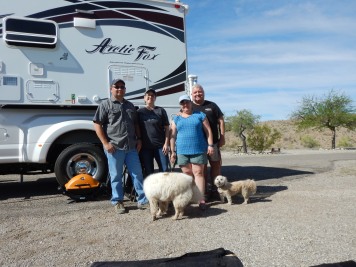 The whole crew! Bella did not want her picture taken

In researching Alamo SP, I had heard from good friends that it was basically over run by rattlesnakes and scorpions.  Keep in mind this particular friend has what I would describe as an extreme aversion to snakes so if there was a snake anywhere within 50 miles it was still to close.  This made us a bit nervous because we were taking our fur babies Bella and Missy.  With Bella’s impaired vision, we would need to be diligent.  For the record – we did not see one snake or scorpion while we were there.  We even brought a black light and searched for scorpions at night, but never saw anything.    One animal that is a known commodity in this part of the state is wild burros.  Sam and I saw one as we drove into the park and there was fresh evidence of burros throughout the campsites which should have foreshadowed what was to come later in the evening.

We arrived at about the same time as Kim and Guy  and set up camp. I know we are travelers and not campers when a few minutes after setting up our campsite,  Sam sat down and asked “what do we do now?”   Due to a lengthy drought in the region, the lake was pretty low so there are no real lakeside campsites anymore. The lake is known for bass fishing and there was plenty of boats there to prove it.  Always a surprise to us was the park was full of families with kids running around having a blast doing kid things…biking, flashlight tag, glow stick tossing and just running free for a few days.  The surprise was that except for a few large diesel pickups firing up for a predawn trip; hauling the boats to the lake it was very quiet at night.  Our experience has been almost all people who take the time to go out camping are respectful of other campers and everyone gets along. That fits well with our desire of just spending time together, sharing a meal, conversation and good wine.

Staying cool in the shade

Later in the afternoon Kim and I took the girls down to the lake edge.  They were interested but didn’t want to get their feet wet or muddy.  They are true city girls. 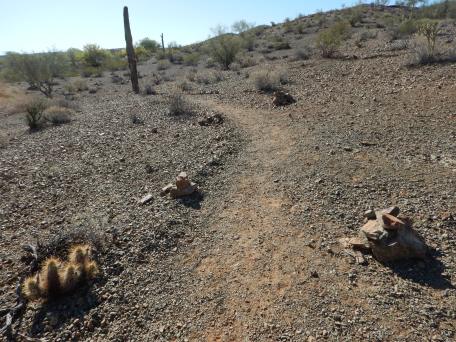 Sam made his famous steak salad and we  waited for  the sun to go down.  This park has great stargazing because it is far away from other towns or communities.  We were not disappointed.  I have never seen so many stars at one time.  We could clearly see the milky way and spotted several satellites.  We toasted marshmallows over the campfire and went to bed.   I always look forward to sleeping in the truck camper – I can really sleep, which is not a usual occurrence for me.  We had the windows open at night to capture the 50 degree coolness of the desert drifting through our open windows.  Around 1:00 in the morning we were awoken to what sounded like a fog horn right outside our window.  We were startled, but immediately knew what had made the incredibly loud and long noise – burros.  They came into the campground at night, after all this is their world, we just were visiting.  We both starting laughing.  This went on throughout the night as they explored the quiet campsites under the cover of darkness looking for anything left outside that might be remotely edible to a burro.   Sometime during the latter part of the night, the coyotes joined in to the burros chorus.  Our girls stayed quiet during the burro visits.  Not sure if they were very tired, or knew that the animal outside was much bigger than them, but regardless, they knew to keep still.

Kim and Guys getting ready to eat. 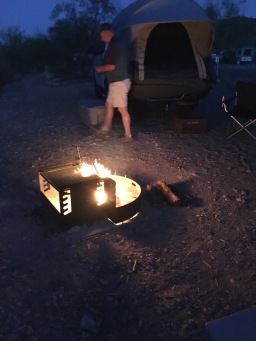 The next morning, we went for a short hike on a trail system that began at the campground.  The trail was very well marked with cairns.  It was a beautiful morning, but  we had to pack up and get ready to head home.  One thing to see if you visit Alamo Lake is drive the short distance to Alamo Dam.  It was very impressive.  On the way out of the park we did a reconnaissance of the different camping areas.  This is a large Park and has campsites that run the spectrum from full hook-ups, boondocking areas to tent platforms.  We were interested in several areas that have ORV access from the campgrounds to the Desert.  One of the camp hosts told us if you know where you are going someone can get to the famous Desert Bar near Parker (on our bucket list).  We will definitely do our homework and return in the Fall with our 4 wheel drives to do some exploring.  I think Kim and Guy are hooked, and we plan on many more weekends with them exploring and practicing for retirement. 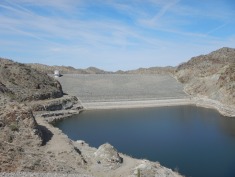 Quite an impressive structure

Although it was a spur of the moment trip that actually took longer to get ready for than do, it was a great weekend and everyone went home tired, but happy!